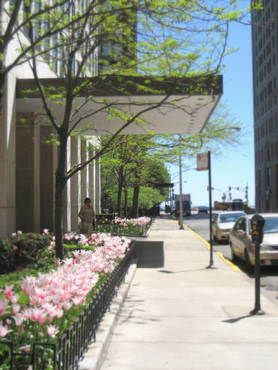 I knew where it was and I could not find it. I had to walk down the block. Ask a friendly doorman. Turn back in the direction from which I had come. If you look closely in the photo above, you will see a lady standing in front of a very nice condo tower. Walk toward her. Turn left just where she is standing. Enter the lobby. You still may not find it. Hal, the lobby security man, will recognize your confused and hungry expression and will point you to the far northeast corner of the lobby. Where you will find a small smoked glass door. Behind which lies a top notch dining experience.
Le Petit Paris has been in business in Chicago's Streeterville neighborhood for quite a few years. I have been coming to Chicago for quite a few years. For this and for that. Business and dalliance. This place is so good that it made me ashamed to admit that I had never heard of it before. Before I received a tip from an unimpeachable source.
This is a small place. Chef Alain is the owner. And, of course, the chef. On the midweek night I first dined with him, the maitre d'. And my waiter. Oh, and sommelier. To say that you get personal attention from the owner at Le Petit Paris is an understatement. The important thing is that Chef Alain is dedicated to each task and to the concept that each diner feel like an honored guest. A seemingly odd notion in much of the restaurant world today. This is the view during the afternoon from my table looking toward the bar...not an uncommon view for return readers, I should think... 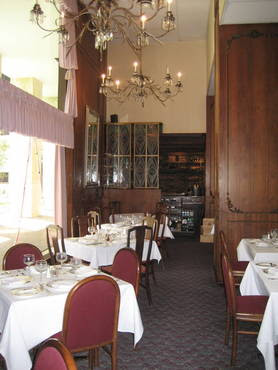 Chef Alain makes a very good martini. The presentation is curious. He serves your cocktail in a small crystal glass that looks like either a miniature martini glass or a huge cordial glass of some sort. I was peering at this with a raised eyebrow when he also placed a small crystal bowl of ice on the table that contained a flask with another four or five refills of the glass in it. Thus redeeming my view of the entire procedure. The table service was lovely as well... 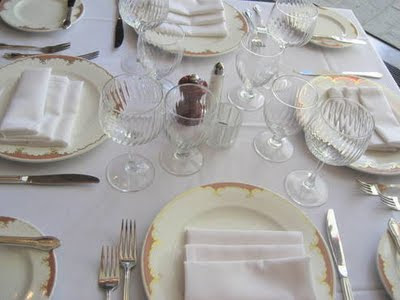 The menu of Le Petit Paris contains perfectly executed standards [pate' with black truffles for example] and seasonal dishes. Chef Alain has obvious connections to local produce vendors. All of the vegetables served with my meal were stunningly fresh and prepared in the best, simple, way to let the natural flavors stand out. My red and yellow beet salad was lightly dressed and the beets were so fresh I could have just had five portions or so for my meal and been perfectly happy. But that would have been a shame. Because if I had stopped there I would have missed the salmon en croute. Perhaps the best dish I have ever had. Certainly in the top five. Again, the fish was so fresh it had striking and lovely flavor. It was Chef Alain's thought to layer leaves of new basil along the top of the fish inside the light-as-air pastry. This had the perfect complimentary flavor and really brought out the wonders of the salmon. Along with just a touch of a rustic, large grain, mustard sauce. Some "just from the farm" asparagus and a bit of potato puree to round off the plate? Oh yes. I think so.
The Le Petit Paris wine list is lovely, with selections for every taste and budget. Budget? Goodness, did I use that word? Have no fear. The prices at Le Petit Paris are very reasonable. I had to bite my tongue not to tell Chef Alain to charge more for this exceptional food. Such are the lengths I will go for you.
Return readers know that I fully adopt the theory of transportational dining. In which, during the best meals, the Epic diner is taken to another place and time. This meal was so wonderful that despite sitting in the corner of a condo building lobby [albeit a hidden corner] I had very little trouble imagining myself sitting, perhaps outdoors, in the French countryside, dressed well, with cocktails, marvelous dishes and great wine appearing from all quadrants. The Duc D'Lane at table.
Back when I could eat anything I wanted, any time I wanted it, I often had dessert. With the usual consequences. In those times, my favorite dessert of all were profiteroles. Little puffs of pastry cut in two, filled with ice cream, and drizzled with dark chocolate sauce and a scattering of shaved almonds. Profiteroles were the first really great dessert I ever had. Back in New Orleans. Years ago. Late at night during a serious rain storm. When a lady at another table sent the waiter over with a plate of them and a note written in lavender ink saying....well, perhaps a tale for another time. Suffice to say that profiteroles dropped a spot to become my second favorite dessert. In any event, I saw them on the menu at Le Petit Paris and casually asked about them. Chef Alain makes them with PISTACHIO ICE CREAM. An obvious masterstroke. One that had not occurred to me before. Nor, it seems, to any of the pastry chefs preparing the profiteroles of my prior acquaintance. I was informed by a very suave looking ten year old boy at the next table that the combination of the puff pastry, pistachio ice cream [just a bit melted, as it should be], bitter dark chocolate sauce and a few scattered almond and pistachio pieces were as perfect a rendition of this dish as could be imagined. As I said, the boy was rather urbane.

But a restaurant cannot be truly great without great people. I was walking about the place after my meal and found myself in the very cozy little bar which adjoins the main dining room... 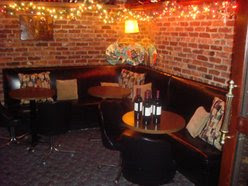 I stumbled [figuratively] into some very interesting people at the bar. Where I remained for a couple of stimulating hours. Sharing stories. Laughing. Drinking wine. I not only had one of the great meals of my life, but I made a new friend as well. The perfect ending for a perfect dining experience. While Chef Alain sat at a table in the now empty main dining room, apparently doing his books. I offered to remove myself from the premises, to which he replied that he would be there until two a.m. "So why not stay?". I have no doubt that had I ordered the entire glorious meal over again he would have prepared it without blinking an eye. The place is his home, you see. You aren't just a customer, but a guest.

The next time you find yourself in Chicago, give yourself a culinary scavenger hunt. Find this little place on Chestnut Street. Think of me. I'll be wishing I were there as well.
Posted by M.Lane at 1:21 AM

Excellent post timing! We're going up to Chicago this weekend to celebrate my birthday. I will seek out Chef Alain and his lovely restaurant!

I love the idea of transportational dining (and before I forget to tell you- this was a transportational blog post. I felt like I was at Le Petit Paris! Merci!). Your meal sounded absolutely exquisite.

There is a wonderful new French Bistro in Santa Monica Mr. DC and I took my parents and we sat and had the seafood platter (a la Francais). But the wonderful thing about the bistro is that the owner transports you to Paris with the decor). Everything about it from the tiled floor to the chairs to the mahogany bar reminded me of being in that wonderful city of light. *sigh*.

Also, sometimes when I am dining in less than desirable surroundings, I use my imagination and pretend I am dining al fresco on the Italian Riviera or in Paris or Monte Carlo to comfort myself. I have a very active imagination.

Man what a great city, Chicago. I was never there enough when I was only 90 minutes away by speeding car on the Indiana Toll Road.

Chef Alain JUST made me a Hendricks martini!

CL, incredible!!!! I am SO very pleased and I wish I were there!

You and me both.

I will surely look for Chef Alain. Thanks.

Tintin, we need to set up a road trip...