The One Suit Man 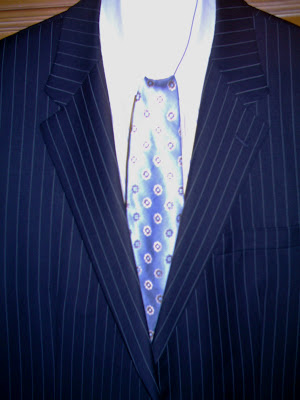 Somewhere there are towns where men's clothing vendors have people working for them that actually know about men's clothing. Where I live, there is only one man. "Mr. Walter" is in his upper sixties, has been my friend for many years and is the last remaining haberdasher in these outlying parts.
Mr. Walter has a term which he appends to the sartorially unenlightened. He calls them the "one suit men". Meaning they own one suit, for use at their arraignment. Or, later, at their funeral. I do not hold it against a man if he only has one suit, particularly in the current economy. If it is the right suit. Like this one, for example.
I wrote earlier about the one "magic suit" I have that always gleans me a compliment, a good table, an upgrade, even (twice) a job offer. This is the suit. Selected for me by Mr. Walter. Midnight blue, single breasted, two button pinstripe by Ralph Lauren. Matched with this shirt by Charles Tyrwhitt... Pale yellow with blue and white stripes, contrasting cuffs and collar. Double cuffs. I actually had to scan my shirt for you because my lousy camera would not capture an image of it for some reason. Matched with the tie shown above which is blue silk with cream rosettes outlined in yellow. I kid you not, this outfit never fails me. It is the one I turn to when it is all or nothing. The Last Stand. The Big Deal. For such occasions, I have nothing else that will do. So, thanks to Mr. Walter and a great shirt company, I guess I am a one suit man too.
Posted by M.Lane at 3:35 AM

M., Mr Walter would not think much of me because I am a one suit man. A tropical charcoal Southwick Douglas that I picked up about 3 or 4 years ago. Before that I had three suits and I've since gotten rid of them all. I'd like to acquire a winter version of the same, but I never have $1000 lying around anymore. My lonely suit gets out about 3 times a year only because I'm a shameless overdresser.

Excellent suit and tie/shirt combination. If you're ever sitting across the aisle from me in court wearing that, I'll know I've met my match. Plus, I'm an accountant, not a lawyer, so I would probably meet my match against Pee-Wee Herman in that case, but I digress.

Mr. Walter sounds like an artisan. And you are so right about this economy...I would rather have one great suit than 50 mediocre ones. (Not that I wear suits... but you do know what I mean).

Longwing, you have to take his natural conflict of interest as a suit salesman into account also. And the fact that he is 70 or so and looks at it from that viewpoint. Southwick is great. I have the art work from one of their ad campaigns blown up and framed in my den. It was called "Nines" and had three fellows at a club playing billiards in it. I know what you mean re the jack lying around...same here. AND I'm glad there are other shameless overdressers about.

Turling, I'm still laughing about the PWH adversary. I don't think you can beat Zegna. The fabrics are so wonderful. Just like Brioni to my mind. That suit sounds GREAT, and I think the armor reference was just what I was thinking but couldn't express.

DC, just ANOTHER thing we agree on!!

Exquisite. I read somewhere that Beatrix Potter wore the same tweed suit for 40 years. I have a nice gray tweed I'd wear more often if I had anywhere to go.

I need you to take me to Mr. Walter. My one suit, was purchased over a decade ago.

Mrs. Scoffs...you cannot wear a tweed suit to Vegas under any circumstances...as you well know. What you need is for Pierpont to take you to Chicago or NYC. Or London. Out where you live, I'm not sure. Seattle? As usual though your turn of a phrase was perfect.

Streak, my pleasure pally. You know where to find me. I hope you didn't buy it for an arraignment.

I have a few opening and closing suits that I always go to. Can't say they're always money. Your suit looks to be, though!

I had a My Cousin Vinny-type co-counsel from L.A. who once bet the court staff that he could wear a different suit every day for a lengthy, high publicity drug trial we both defended. Mr. Lane, I'm not embarrassed to tell you I saw some awful suits that month. But he won the bet.

One good suit of good make, well-fitted and kitted out is worth six of the others.

I'm lucky to own several.

For me, I was a one pattern man until recently. Had to be chalkstripes.

GREAT shirt, by the way.

I love a good magic suit! I can see why this one works like a charm.