Of Booze And Babies: Late Night At The Palm 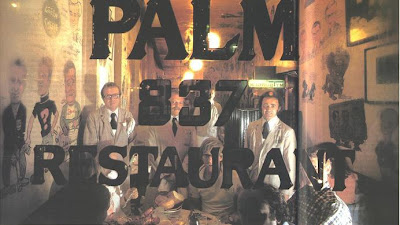 The second time the commuter jet appeared to move in three directions simultaneously, I quit praying long enough to recall a distant memory. At the age of ten, I became violently enamoured with learning to fly. Too young to obtain even the rudimentary license required for lessons, I hung out at a tiny local airstrip until the owner took pity on me and let me look at all his ground course training tapes for free. That was where I became acquainted with the theoretical planes of motion that aircraft encounter. Pitch [nose up/nose down], roll [wings tipping side to side], yaw [plane twisting on its center vertical axis, nose right/nose left].

I never took flying lessons. Thirty-five years later, on that evening flight in bad weather, I re- encountered my old pals pitch, roll and yaw. In a practical, not theoretical, manner. Repeatedly. In an aircraft lacking a bar. Perfect.
Impending doom aside, it seemed like this trip had all the seminal indicators of being a less than satisfactory excursion. Away for most of two weeks, I was dearly missing my wife and seven year old son. I had been rain-wet during the flight boarding process in the podunk place from which I departed. The flight had been delayed due to bad weather. And then launched into it anyhow. The business traveler knows the signs. As I sat, damp, scared, too sober, pitchyawrolling in the dark sky, I felt about a hundred years old. And I entered an unusual place for me. The little room with the "I don't want to go out this way" sign on it.
We landed later. At full throttle, probably on one wheel. A real Red Baron job. But landed all the same. Too late to make dinner with a friend whose company would have balmed the jangled nerves. As I drove toward the hotel in the (still) pouring rain, I felt more lonely than I have felt in my entire life.
At least I had time for dinner at the Palm steakhouse. A chain, yes, but one of my favorites. And, in various locations, the site of many Epic occasions. I arrived a bit the worse for wear, a bit wrinkled, a bit damp still. I usually do not like dining in the bar portion of a restaurant, but the Palm has small booths in the bar and I took one rather than wait for a table. Besides, in the booth nobody could see how disheveled I looked. I stared into a very good martini and glumly pondered the day.
From the corner of my eye, I happened to notice an attractive young woman in the only other occupied booth. Not because she was pretty, but because her date was in a baby carrier. One of the sort that you can snap into a stroller or carry about with you. You just never see a baby in the bar of a great restaurant. I'm not sure that it is legal. Anyhow, I was too tired and blue to pay the issue much mind. Until she appeared at my elbow and said...
"You look like a fellow who needs to hold a baby."
She gave me a big, beach-tanned grin and held out the child who seemed similarly pleased at the notion.
I goggled. A vague reference from my wife about not letting anyone touch the baby floated through my increasingly fatigue and Stoli clouded mind. Along with glimmers from old episodes of "The World's Greatest Con Artists".
"Um, uh , well, I could have Hepatitis, or the flu, or......"
The same sparkling grin from both of them.
"Well, DO you have Hepatitis or the flu?"
Well, no. She pushed the baby into my arms. Despite my reservations, it was as if I had been plugged into some form of cosmic battery. I was instantly renewed. Reinvigorated. Re-inspired. Tactually transported to a time seven years earlier when my son, and my fatherhood, were new. I held the child for about five minutes as his mother and I chatted. It turned out she was in college, working at the Palm as a server. That five minutes was one of the most memorable times of my life.
Afterward, I would always ask for one of her tables. Over a couple of years, we would show off photos of our (ever larger) babies. Finally, she graduated college and moved away to start a promising career. I never saw her again.
A book I like a lot says that we should remember to be kind to strangers because by doing so we may unknowingly entertain angels. I think it works both ways. During some of the darkest, lonely nights, when the skies are tempest tossed, the clothes not water resistant, the family too far away, a couple of angels may just decide to put themselves right in the middle of your life and fix everything in an instant. I know. I met two of them.
Endorsement Note: The Palm did not pay me to write this or to mention their establishment. I wish they had.
Posted by M.Lane at 6:49 AM

A lovely story, Epic. I wonder: how did she know!!?

Belle, thank you. That means a lot to me. I'll try!

CL, I do not know. Angels are funny that way.

That was great. Thanks for sharing that with us. I look forward to more such stories.

I love that you kept in touch w/ her for so long! reminds me to quit being such a curmudgeon...

MMel, good to see your comment again!! I just got a kick out of catching up with her when in town.

A wonderful post that I only now had the chance to sit down and pay attention to. Just charming.

And I detect a slight change in writing style. It suits.

i'm a 'drop by' reader, usually on Saturdays, when the week of have-to-reads and have-to-writes is over and i can take an extra hour to catch-up on things i wish i could entertain with more regularity.

you're very good. never met you or heard your voice, but your writing voice is distinctive. i read your boxing post not too long ago and found it, and now this one, to be a breath of fresh air amidst a blog-wide atmosphere of brutally mundane writing.

like the feeling you often share with us when you settle comfortably into a booth at a longtime favorite bistro, i'm never disappointed whenever i drop by to find out what you've been up to.

Sligo, thank you very much! What a nice comment. Now, if you know any bigshots in the publishing field that want to make me famous...