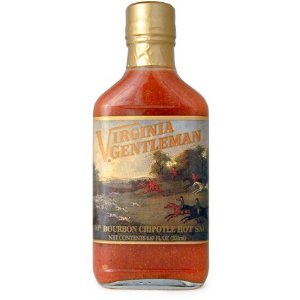 Mr. Earnest was, as Anthony Bourdain would say, a cook--not a "Chef".  Specializing in the outdoor preparation of various meals such as roasted meats cooked slow over hickory and apple wood.  A master of his craft.  I first met him about two weeks into a three year idyll in the Blue Ridge Mountains of Virginia.  As hard as it may now seem to believe, I was not a drinker until then.  A top flight legal education cured me of abstinance.

At one point that first evening, emboldened by the curliques of smoke rising into the Virginia stars, I engaged Mr. Earnest in conversation about his cooking techniques and how he loved the area where he grew up.  Late, when the fire was burning low, he offered me a taste of bourbon.  I loved the southern elixir at first taste.  I found out that although a lot of bourbon was made within a few square miles in the state of Kentucky, Virginia had its own brand.  Appropriately, Virginia Gentleman.

Over my three year residence, I came to taste a lot more bourbon of various sorts.  Ate a lot more great food.  Inevitably, the time came to leave.  Mr. Earnest gave me a bottle of VG.  I gave him a big chefs hat and few other items.  Including my far away telephone number.  Just in case he ever needed the services of a new lawyer that didn't know anything about anything.  He never did.

Time flies.  Tastes change.  Improve or not.  I had not thought of those cookouts nor of that bourbon for quite some time.  Due to the intervention of numerous other details some would describe as "growing up".  Last week, I was grocery shopping and I passed down the aisle where they display various sauces.  The beautiful bottle shown above jumped out at me.  Rather expensive but I had to have it.  Virginia Gentleman.  Bourbon.  Chipotle.  Hot Sauce.  How could I go wrong?

I admit, I had a lot of reservations about it.  Lets face it, the history of sauces branded with unassociated manufacturer names is not a happy one.  In fact, the odds bet was it would be awful.  But the artwork on the label and the memories the name evoked removed any hesitation.  The question remained, would it be worth eating?

I am very happy to report that this is the best sauce of its type I have ever tried.  It is hot.  But smoky hot.  With a bite after the bite.  A deep flavor.  Redolent of crisp Autumn skies, wood smoke, roasted meats.  After my first taste, I have enthusiastically applied this sauce to all sorts of foods, always with superb results.  I am laying in a case for my personal use.

The best thing about this sauce for me, though, is that it brings back wonderful memories of old friends.  Mr. Earnest would certainly approve.
Posted by M.Lane at 8:06 PM

Email ThisBlogThis!Share to TwitterShare to FacebookShare to Pinterest
Labels: Dine.

Ooh it really does sound delicious... I must try it! Always looking for the perfect sauce. And love your story about Mr. Earnest!

Man I need some pork ribs. And about two fingers in a heavy tumbler. VG will most definitely do.