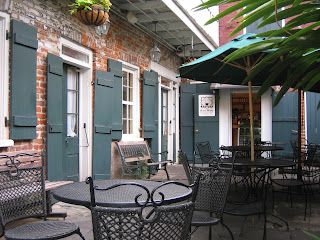 In my job the days are malleable.  Monday does not have to be Monday.  Tuesday is usually Monday.  After a particularly hefty weekend, Wednesday is Monday.

As it was that day.  When Eleanor called from behind the bar downstairs to tell me there was a fellow wanting to see me.  About a job, not a bill.  Or some pesky lawsuit. Eleanor chooses her words carefully, being one of that sort of bartender with a degree from Columbia.  When she says that a "fellow" is downstairs, then I know it translates to "well-heeled paying customer". And that I should pay immediate attention.

I put on what was left of the black linen suit I had been wearing that weekend and a fresh tropical weight white shirt with small black dots on it.  Shoved my bare feet into an ancient pair of pale green Gucci loafers and made my way down to the French Quarter bar that serves as my office.  That was when I met her father.

I walked past the storage room and entered the back of the dark bar. I narrowed my eyes. It always surprises me that my eyes still take time to adjust to dimly lit rooms after all the time I have spent in them.  I saw a man in his sixties, a decade older than me, dressed superbly in a tailored pale blue tropical weight suit with a pink and blue rep tie and a dazzling white shirt.  I just knew that his double cuffs were fixed with silk knots. I was right. One pink, one blue. He looked like one of my old partners at C******.  Maybe a wills and trusts specialist.

We sat at my "desk".  The back corner table. He ordered chicory coffee with cream. I had a double Powers, neat. What struck me most about him, other than his really nice clothes, was how tall he was.  And how worried.  He had the feel about him of recent defeat.  A pale cloud of sadness that blended seamlessly into the humid scent of a New Orleans morning.   Before I could ask, he told me.

I heard you could find someone for me.

I can do that.

How much would it cost for you to find my daughter?

It doesn't cost that much to find someone. The expensive part is afterward. And that part depends on what you want done after I find her.

All I want is for you to deliver a letter to her.

I eyed him over the rim of the heavy rocks glass as I took a sip of my whisky.

There are lots of people that deliver mail for a living.  Professionals.  Why not let me find her and then just send a letter to her?

Because I want to know...

He had last seen her in Miami, three years before. They were on a family vacation at the beach. She was twenty then.  There had been a row about an older man she was seeing. Then a note on a bed stand. Then, nothing.

Why didn't you search for your daughter then?

I did.  And I found her. In Maracaibo. She was there of her own free will. And she refused to return.  That was the last I saw of her.  You'll need to start there.

There are certain words that cause every man to flinch. Inside, where it counts most.  For young men the words are usually something like "tequila" or "pregnant".  For men my age they are usually a woman's name.  Or the name of a city.  Maracaibo, for example.  My memories of three days in the second largest Venezuelan city were brief, dark and violent. And those were the images I could recall at all.

He must have seen something in my face.  Something that caused him to say he knew that Maracaibo would be a challenging starting point.

I know.  I've had business there before.

Successful for one of the parties involved, yes.

He pushed three envelopes to me across the table.  The first was of immediate interest because it contained a thick stack of money.  The second was sealed.  Actually sealed with wax.  Hadn't seen that in years. About two hundred years.

As I thumbed the edges of the bills, he asked if the fee was correct.  I knew it was because Eleanor would have told him the amount before he got there.  She must have known the job involved what she called "Southern Travel" because it was a lot of money.  Enough to keep even a fellow of my tastes and vices going for a couple of months.

The third envelope was also open.  I pulled out a sheet of engraved note paper with her name, birth date and some other basic information on it.  There was a photo clipped behind the sheet. Face portrait.  Expensive studio. Black and white, no makeup, striped blouse.  High cheekbones.  Dimpled chin. Wide, clear eyes. The most strikingly beautiful face I had ever seen.  I stared at her.  And I immediately felt sad.  That her father was here.  Having to talk to me. Because I am always the last option. The choice for people who have run out of choices.  I felt that my chances of delivering the sealed letter were somehow slim.

We shook hands and he left.  I downed the rest of the whisky and paid Eleanor my rent for a month.  Then she made me a red bean omelet with butter loaded grits.  A pile of toast with the bitter marmalade she made herself. Since I was now "engaged" as she put it she added a stick of hot Andouille sausage to the plate.  She also brought me a big mug of the chicory coffee with another hit of Powers in it.

I ate slowly and considered my strategy.  I would have to go to Miami and then fly down from there. I would book a room at the Fontainbleau for recuperation after I got back.  That would give me some forward target anyhow. The problem was the photo.  I couldn't stop looking at it. She had one of those faces that you see for a moment on the street that make you feel bitterly alone.

I finished my meal, kissed Eleanor on the tip of the nose, and went upstairs to pack.
Posted by M.Lane at 11:45 AM

Sucked me right in. Can't wait for the next installment!

Wow. You're not fooling around. This is great.

Ben, I'm trying. I've been communicatively repressed of late but I think I'm breaking out of it.
Thanks!

NEW, thanks so much! I cant wait until he gets to S. America...