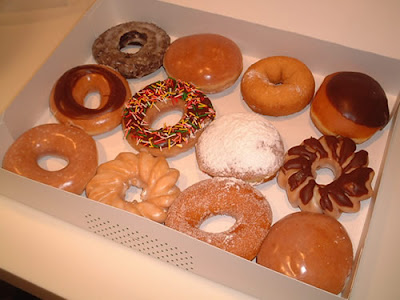 Someone at my son's school is a real sharpie. Every so often, they have a "Dads for Doughnuts" event when we can visit our child in class, sit in an excruciatingly confining chair or desk, and have doughnuts with them for half an hour. It is a lot of fun, but amazingly it always falls on the day that some big fund raising event is kicking off. Book Fair. Holiday Greenery Sale. You get the picture. I imagine that Dads for Doughnuts mornings are very effective for fund raising. If the number of books I typically purchase at the book fair is any indication.
When I can go, that is. As return readers know, I have a rather brutal travel schedule most months. Which makes it an almost certain bet that when DFD morning is announced, I will be in some far flung location. That makes me feel really awful, the "hunting/gathering" issue aside.
A few weeks ago, I thought we should have a make up day for Dads for Doughnuts. I woke my son up extra early (he loved that) and we skipped car pool and drove down to an old-time local doughnut store that opens early. They have great doughnuts and great coffee. Which you can still consume while at a counter seat. As it most certainly should be. We had a doughnut. His favorite is chocolate glazed. Mine is anything with sprinkles on top. We had some coffee. And a chat. About nothing in particular. But is was such fun. I wished we could have stayed at that counter all day. Just laughing, talking, and letting the world pass us right on by. Cardiologists be hanged. But the siren calls of the office and the opening school bell served to pull us away. As they will.
Most nights my son has problems going to sleep. No huge medical issue, it is just that his internal clock runs in a different zone than mine. Perpetually. So, often times, he will be hungry and in need of some sort of food. By the time he skulks out of his bedroom looking for chow, I am usually in my library, working, reading or writing for The Epic. Some times, I am so very tired it is hard to muster enthusiasm for a late night cooking event. But even with a growl of sorts, one feeds ones child. I haven't failed him in this regard, at least, to date. His favorite dish in the wee small hours is an omelet. He can make it himself, of course, but I make it anyhow. We have shared many a laugh, a story, or just nothing at all, while cooking and eating an omelet. This, then, is the Future Rock Star's "special" omelet recipe:

Crack the egg into a bowl and scramble it up. Pour it into a small saute' pan. Sprinkle the top surface with garlic powder and Hot Shot pepper blend. Slice the cheese into little ribbons with the tip of a paring knife. When the surface of the omelet firms up a bit, distribute the cheese around on it and watch it melt in little ribbon shapes. This is actually a zen like experience, especially at midnight. Then fold the omelet with a spatula [no flipping of omelets for us, especially at midnight] and serve with a bottle of Valentina sauce. This is a very fine hot sauce by the way, and inexpensive at that.

When I was a small boy, my grandfather was cutting my hair at his kitchen table one morning and nicked my earlobe. I bled like a pig. My poor grandfather thought he had killed me. I thought he had killed me, since this was my first experience with the drama of seeing ones own blood spilled. The only thing my traumatized grandpa could think of was to put a big bag of multi colored marshmallows in front of me and let me eat them all. Worked like a charm. That was when I first discovered the magical [and life saving] powers of food.

The nourishment, spiritual and physical, that my grandpa provided to me that morning long ago is something that I am proud to be able to pass along to my son. Early or late in the day. 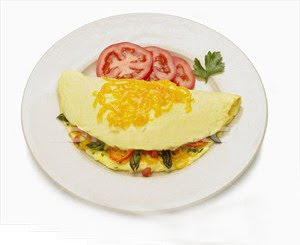 Email ThisBlogThis!Share to TwitterShare to FacebookShare to Pinterest
Labels: Do, Love

Oh I am in such a hurry to get my boy to school. I am SO looking forward to reading this later (stealing time from my partners).

That sounds delicious! I love a good omelet... the future rockstar is lucky indeed!

You've found me out!

A few days ago I stopped at a service station where they had a branch of that well-known American chain of doughnut shops. I was hungover and already feeling very much over-indulged so resisted the temptation to buy a large box to consume in the car. But now I can't forget them and your picture and description of a doughnut/coffee/ chat with your son (how could anything beat that?) has made me crave them even more.

How could you do this to me?

Ben, in my experience, that is time well stolen...

DC, Thanks! As least he can make a dish he likes and he isn't starving...

Helena, welcome to The Epic and thanks for the comment! Trust me, I have been in that car. Those doughnuts are a cure, like Kryptonite, for a hangover. Or at the very least they divert ones attention. Sorry to have inflicted metaphysical pain on you! The cure is......doughnuts!!

MLane, thanks for the tip. Having just become the father of a pre-manufactured 7 year old(going on 35), I have a desperate need to know these things. I frequently try and persuade her to try new foodstuffs but cooking for her--that's a good thought. But no hot sauce for her, believe me I've tried. She turns up her cute little button nose at anything remotely 'spicy,' including that greatest of all American snack foods/essential food groups Spicy Sweet Chili Doritos.

I agree with you wholeheartedly about the power of food. Probably why I eat so much of it. Some folks eat to live.....etc.

You have written many wonderful posts, but this one has really gotten to me. I love the image of the morning doughnut and the late night omelet with your child. I hope to have such moments of utter perfection in my relationship with my son. I know I will affirmatively seek them out, as you did by gettting the FRS out of bed and by stepping out of your quiet study in your darkened home.

Ben, we just have to steal the time together that we can that do not involve tedious issues of discipline, homework, etc.

BB3, its an ancient connection between parent and child but a fine and strong one. LOVE your description of the Doritos and I agree [if I ate such things of course]. I have a friend who is very accomplished at Karate, a huge guy from Louisiana. He told me once, "I don't smoke, I don't drink too much, I exercise all the time...but I love my food. The food will get me eventually. And I'm ok with that..." My kind of guy!

Thanks for the comments and your visits to The Epic.