The Epic Chapbook: An Alternative Omelet 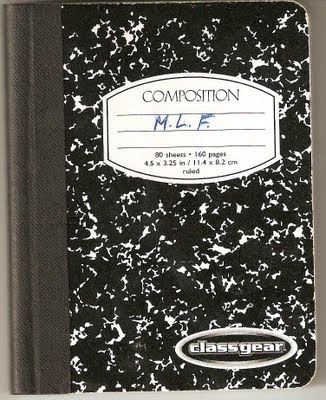 My mother gave me this little composition book a while back. I carry it around with me and use it as my chapbook, the repository of various scribbles. Items to be submitted to Six Sentences. The first lines of poems. Blog ideas. Random notes.

My last post was, in part, about making omelets for my son. A few days after publishing it, I was in an airplane seat paging through my chapbook and I realized that I had written another version of my omelet post some weeks earlier. It went like this...

A man needs to know how to cook. All the books say so. My wife says so. If there is one thing I learned from pouring over old copies of Esquire and Playboy during my formative years, it was the utility of being able to make up a little something to ear at one in the morning while a painfully chic and leggy date sipped a martini on the sofa of my penthouse apartment.

As luck would have it, I ultimately found my cooking skills most useful after a long night at the office rather than at a swanky night club. Possibly a function of the fact that there are no swanky night clubs where I came to live. My mistake. In any event, the ability to put together a nice meal with a minimum of chaos is, in my book, a mark of the well finished man.

So too the man-in-training. My son, the Future Rock Star, has always loved to cook. But he loves more watching me cook for him. Especially late at night. In my house, it is not unusual for the FRS to manifest at my side of the bed around midnight, hair sticking out all over, hazel eyes sparkling. Wide awake. Needing an omelet. His special omelet. Derived by us over many late nights at stove and table for half of his twelve years. I hope the music thing works out for him. He certainly has the internal clock for it.

So I rub my eyes open and stumble to the kitchen. Where we end up cooking the FRS Special Omelet while laughing, talking or doing nothing at all. Here is the recipe:

Crack the egg into a bowl and scramble it up. Pour it into a small saute' pan and sprinkle the top surface with garlic powder and Hot Shot pepper mix. As the omelet is firming up, slice the cheese into little ribbons with the tip of a paring knife. Add the ribbons of cheese to the top of the egg and watch them melt into interesting shapes. The shapes are more interesting at midnight, I can tell you. When they are melted, fold the omelet with a spatula and serve with the hot sauce on the side.

Repeat as necessary until hunger abates. Sleep comes. And nourishment, physical and emotional, is stolen from the ordinary events of another late evening. Bon appetit.
Posted by M.Lane at 3:08 AM

Ha! It's really interesting to read both versions. I write my blog posts on word before I post them into blogger and they oftentimes end up very different from the original idea. Love your writing- it is very rich.

DC, thank you! The funny thing is that I had completely forgotten that I wrote the first one until after I published the second!

Love that you use the term "chapbook".