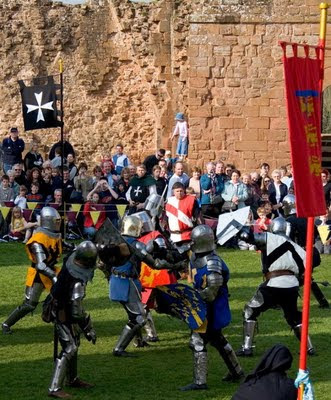 I love shopping. I really do. But not on this day. When I religiously stay at home to avoid local mall and shopping center carnage like that depicted above. The only good time I have had at a store the day after the Thanksgiving holiday was eleven years ago...

My wife and the then one year old Future Rock Star were on our first trip to my parents' home for Thanksgiving dinner. All went well until afterward. When the FRS, displaying his now legendary inability to go to sleep until the wee small hours, howled mercilessly as soon as we returned to the motel room. His poor mother was even more exhausted than I. Finally admitting defeat at about one in the morning, I bundled up the FRS and we got in the car and drove across the highway to a 24-hour discount store. Where I pushed him about in a shopping cart for about four hours while his mother slept.

The town where we were staying isn't really a town. It is more of an interstate highway exit with a couple of motels and a shopping center. I mean, this is in the country. And the surrounding woods and fields are populated with deep country folk. Which in my neck of the woods means mainly big, heavy folk.

We saw many odd and horrific things during that four hours. The first was the fact that there were shoppers in the store at one a.m. Lots of shoppers. The second was the realization that the FRS and I were the only male shoppers. The third was a strange merchandising technique.

The store had placed huge pallets of mystery goods, six or seven feet high, at extra-low sale prices, out in the aisles wrapped up like big Christmas packages. The notion was that at certain times of the night/morning announcements would be made that "package A is ready to be opened" and then the shoppers would advance and in an orderly fashion remove the wrapping paper and get the individual goods underneath into their shopping carts. Obviously not a marketing idea that was run by the legal department beforehand.

Despite my own level of exhaustion, I had just enough sense left to realize that I did not want to be anywhere close to those packages when they were subjected to the "orderly" unwrapping efforts of the other shoppers. But I wanted to be in viewing range. Safe viewing range. The first pallet was due for unwrapping at 2:00 a.m. At about 1:30, a huge woman came up to me and said "Honey, you don't want that baby anywhere near that package when they say we can undo it". I thanked her and backed even farther away. Like a civil-war artillery colonel looking for better ground.

At 1:45 a.m., my fellow shoppers began circling giant package "A". I could see that, in shopping as in the rest of life, experience is everything. There were two kinds of ladies in this store shopping. Very big. And very small. The more experienced ones seemed to have a team-mate who was responsible for the cart while the leader would charge the package. A crowd of women, some with carts, some without, began circling giant package "A" as the loudspeaker announcer counted down the time to the unwrapping. It reminded me of the start of a yacht race, when the boats all jockey and circle about so as to cross the starting line at precisely the moment the race begins. Only this circling was more malevolent. And drier.

At 1:55, I felt like the lookout on the Titanic, seeing the iceberg coming but not able to avoid it. I backed our shopping cart farther away. Wished deeply for a martini. Or a beer in a long-neck bottle. It is universally accepted that, if needed, a long-neck bottle makes a far better weapon than does a martini glass.

When the announcer stated at 2:00 a.m. that package A could be unwrapped and that "all shoppers should be careful and watch out for the safety of other shoppers", all hell broke loose. Utter carnage. The little, skinny ones hit the package first, due no doubt to their greater speed and agility. You had to admire their boldness and lack of concern for personal safety but they forgot they had to get the wrapping paper off the stack of merchandise. Hands were tearing at the wrapping paper from all quarters. What struck me was the total silence of the shoppers. The only sounds were piped-in Christmas music, tearing paper, and the exertional sounds of the crowd of ladies mashed around the pallet. I leaned over and whispered to the FRS, "behold the ferocity of nature run amok". Or something to that effect.

From my vantage point, it became immediately apparent that the largest shoppers were holding back waiting for an optimum moment to charge. Rather like a medieval force of mounted knights waiting patient in their armor for the foot soldiers to slug it out a bit before smashing into the melee at full gallop. The optimum moment was when the littler, faster ladies had torn all the paper off the pallet, thus identifying for the first time what kind of item was stacked there on deep discount. At that moment, the cavalry charged. With historically proven and gruesome results. Scattering their smaller sisters before them like chaff. Groping boxes of toaster ovens two or three at a time, then elbowing their way out to their waiting team-mates with the shopping carts. I saw more than one ninja-level shopper actually pull toaster ovens off the stack and throw them over the other shoppers to a waiting accomplice who would put them in their team's cart. One lady was talking on her cell phone when the unwrapping time was announced and she missed her moment of attack. Seemingly unhinged, she tried to recapture her advantage by ramming her cart into the throng around the now-denuded pallet. The FRS and I agreed that this was a time-honored and acceptable tactic. At least in naval warfare. Not so much in shopping. The shopper was ejected from the store. Rules must pertain at all times. Or civilized society breaks down.

Over the next two hours, the FRS and I watched the same scene repeat itself four times, on the half-hour. I have never since seen anything like it. If I could have put video of that night on YouTube I would have been famous. I have never been back to that town again on a Thanksgiving night. But if I ever find myself there....

No. I am a lot older now. More easily injured, more prone to psychological trauma, etc. Besides, now they probably charge us mere spectators an admission fee. Whatever the ticket price is, I can testify that it would be the true bargain.

After my one, unintended, entry into post-Thanksgiving shopping, I now shop primarily on line. Today, I hope that all my readers in countries where this madness prevails will sit back, have a martini or a nice glass of wine [or both], and sink into the fantasy and beauty of a lovely web site such as the 2009 Brooks Brothers Holiday Shopping Web Page. It is just gorgeous. I could sit and gaze at the twinkling of their Christmas tree lights all day. Perhaps I will do just that.
Posted by M.Lane at 3:05 AM

Ahahaha! Your post immediately made me think of certain members of my family who live in a similar area who stay up all night going Christmas shopping on the Thursday/Friday in question. They would deny they would never turn into something like that. I'm not so sure :)

Despite today's Haiku, I am NOT shopping today. Wouldn't dream of it.

I, too, have avoided the shops... nothing could bring me out on Black Friday! I deplore crowds :)

Great visuals. Where are you on that book?

I think it ironic that folks were once fearful of dying of what was once called, consumption.

Petunia, I'm not so sure either. There seems to be some ancient force at work here...

Mrs. Scoffs, I have lived the dream. And lived to write of it. Not again...

DC I'm not going back out there...it's too dangerous.

Tintin, I am bouncing back and forth between plot lines. Not very productive technique, eh? Good point re consumption. But where or where would we be without it?

Mr. Lane, I used to go to an all-night supermarket. Weirdest thing I ever saw was frozen turkey bowling. Strange and unhinged people do this. You were the fly on the wall. Like watching a train wreck, I am revolted yet riveted by your narrative. And very thankful for the internet.

Mr Lane, I was there, walking the aisles with you! I agree - it's too much hassle and stress, and my peace would be gone, having to scramble for a bargain or a freebie. I've never done it and I doubt i ever will. I'll be the one with the martini, contemplating the olive and wondering from which grove - locally, nationally or internationally it was picked. Great writing!