Poppies In A Field--Armistice Day 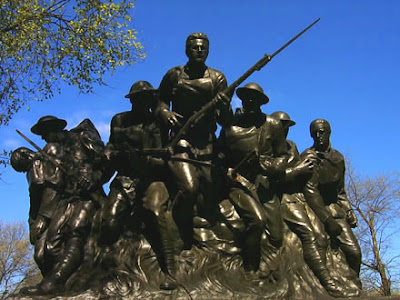 If I should die, think only this of me:
That there's some corner of a foreign field
That is for ever England.
--Rupert Brooke "The Soldier"


In 1914, most of the world went to war. For the first time. As usual, they thought it would be over by Christmas. As usual, they were wrong. Men and boys in almost all countries began training... 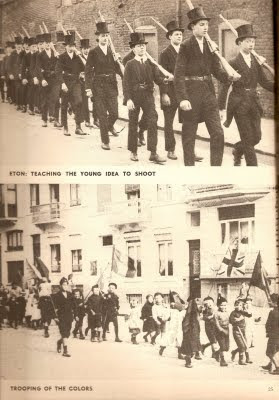 They were sent to quiet, out of the way places like Passchendaele... 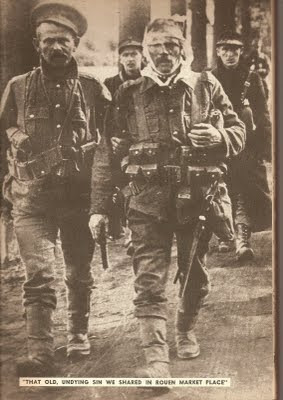 Private Hugh McWhirter was the first Newfoundlander killed in the First World War...
Private Hugh McWhirter mounted no gallant attack. He uttered no brave last words. He had simply been standing, deafened by the screech and explosion of artillery--a terrified boy in an ill fitting uniform in a front line trench near the ridge of Karakol Dagh. Then, from out of nowhere, he had been blasted...by a Turkish shell. Suddenly he was gone, and those beside him in the shallow firing trench were stunned. Sprayed by bits...they knew just as suddenly what this war was going to be about.
--David Macfarlane, quoted in The First World War, A Complete History, by Martin Gilbert 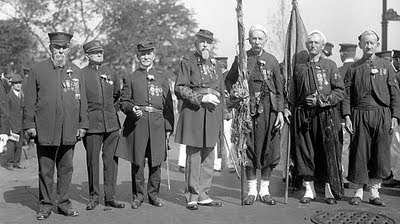 Except that it was "Armistice Day" then. You see, they thought there would not, could not, be another war. Nobody could have wanted another war after what they had been through. After what they had seen. Nobody, that is, except a newly mustered-out Austrian corporal named Adolph. He decided to get into politics. The "final armistice" lasted all of twenty-one years.
I have mentioned before on Armistice Day that almost nobody thinks of the First World War and its veterans any longer. Both have slipped beneath the tide of onrushing history. As is the natural way. The poem "In Flanders' Fields" is perhaps the most famous of all the great literary efforts of the First World War. When I was young, everyone wore poppies on their clothing on Veteran's Day. Even then, few knew that the poppies symbolized the red of the flowers in Flanders' Fields... 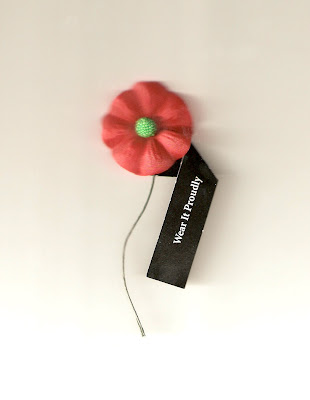 ...and that the red of the poppies stood for all the life-lights that were extinguished there.

Do me a favor. If you can find a poppy today, put one on. If you can't, a little scrap of red paper will do. Think of all veterans and ponder what they gave for us, as is proper. But if you look just a bit, I'll bet your town has a monument of sorts or a public list of veterans of the First World War. If you can find your way there, read the names. There probably won't be many. They paved a portion of what unfortunately has been a very long road. One that stretches off into the future. Whether we remember them, or not.

P.S.  This is a reworking of my most popular Armistice Day piece. I hope you enjoy it again.  ML
Posted by M.Lane at 3:42 AM

a very touching post. i love the way you've used those old photographs. my respects to veterans of wars, those with us and not.

I have my poppy on as I type. My grandfather fought in World War I. Received a purple heart from the trenches. Shot in the neck. He returned to the states and became an artist, while raising three boys and a girl. Many of his paintings were of battle scenes. Scared the hell out of me when I was little those paintings did. Today, I'll think of my grandfather and all the others. Thanks.

A fine post. In Britain, where we commemorate all our (many) wars on Remembrance Sunday, today is more focussed on the Great War (as we still call it).

I wish it was possible to read all the names on our memorials to World War One - but sadly those lists are too long. Without the crucial involvement of the United States in the crucial final years, I have no doubt they would have been longer still.

It's interesting -- I am hearing more people than ever reference WWI directly this Veterans' Day. Somehow it must be in the national consciousness today. I wish I could find a poppy today, you don't see them as much anymore. I like the red paper idea though. Thanks.

I've never seen poppies sold in the US, but they're sold everywhere in the UK. I have one I got last year, and I am wearing my red poppy raincoat today.

Thank you everyone for the wonderful comments. Springheel, I can't imagine what it was like for a nation to lose an entire generation like England did in WWI. And in only about three years. Thanks for your visit and comment. God bless.

Only wish I could have found someone with poppies. No one does that around here. I do remember getting one as a child. Last week (at the grocery) an old-timer was handing out those little white canes for a small donation. I made each one of my sons get and wear one.

Turling - it is about time you started a blog. Posting your grandfather's paintings would be a good start.

I used be be able to get a poppy on post as a kid. Can't find one anywhere these days.

At Mrs. E.'s school they always have a veteran come to speak. Since it was founded in 1911, that first class of boys figured heavily in the school's history. In the case of an active duty serviceman speaking, he may be the first soldier, sailor, airman or Marine that the boys have met.

What a strange world compared with mine.

I may start making my own poppies.

For some reason, I always assumed wearing poppies was a British Commonwealth custom. I didn't know that it was done in the US.

In Blighty, they are sold to raise money for the Haigh Fund, and the proceeds assist disabled ex-servicemen and their families - and of course the families of those who never came back. Around the end of October, boxes of them, and the distinctive scarlet collecting tins, appear in shops and offices as if by magic. And every station in London and high street will have volunteer collectors - very often veterans but also young people. So you have to actively avoid a poppy seller if, for some reason, you don't want to wear one.

It's quite touching to walk down a busy street and see that almost every single person is wearing a poppy. One feels oddly proud to see that people honour sacrifice in this way.

In London you see seas of poppies on people's coats for the 3 weeks leading up to Armistice Day. There is even a moment of silence at 11am on 11/11. I had never seen or heard of people wearing poppies before moving here, but there are an army of volunteers at every train and bus station in London handing out poppies for a small donation. I must have bought 5 or 6 so far! Thanks for this memorable post.

Petunia, thank you very much. It must be so moving to see everyone wearing a poppy. And, thanks for the comment...it is good to hear from you again.

I have been thinking about the poppy procurement issue. In the US I would try a local Veterans of Foreign Wars hall. Better yet, make a road trip to Kansas City and go to the amazing WWI museum there. They have a VFW sponsored cart for donations and it is chock full of poppies!!